History of Koru Winners and Finalists

The history of the RWNZ Koru Contest 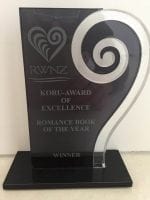 The Koru Award is a FULL BOOK readers’ choice award aimed at recognising excellence in romance writing within New Zealand and across our membership.

What is a Koru? The Koru is based on the shape of an unfurling frond of the silver fern. It is often used in Maori art to symbolise new creation, so is particularly suited to an award for fiction. The spiral shape conveys the ideas of perpetual movement, and also of a return to the point of origin. It symbolises growth and new life, but also continuity and peace. Balanced between the chaos of change and the calm of the everyday, the Koru represents harmony.

(With only two novel – or book – length BFB entries, we will only be giving a first place getter.)
Gold Medal Hero by Jena Petrie – FIRST
Degree Absolute – WA Cooper

And for the category of “Best First Book”, the eligible entrants are:

AND WINNER ON THE NIGHT WITH HIGHEST OVERALL SCORE 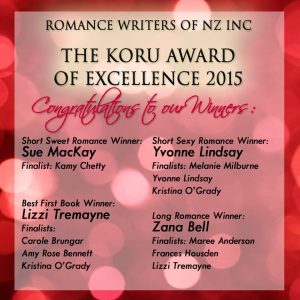 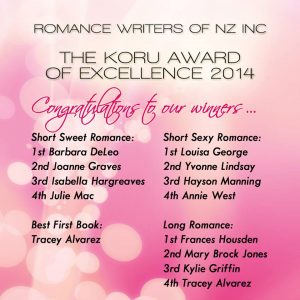